Between 1876 and 1899, the German Botanist Hermann Zippel (later Otto Wilhelm Thomé took over )and illustrator Carl (sometimes Karl) Bollmann produced a large number of educational wall charts in Gera, Germany - the 'Ausländische Kulturpflanzen' (i.e. foreign crop plants). They showed epresentations of (back then) exotic crop plants or at least plants that were not of Central-, Northern- or Western European origin.

Much sooner than e.g. the series of wall charts by Jung, Koch & Quentell, Zippel & Bollmann intentionally made use of a black background for the the colourful illustrations of the 'Ausländische Kulturpflanzen, in order to better bring to effect the depictions of the plants and their anatomy. The producers of wall charts back then were well aware of the importance of aesthetics for their goal of effectively communicating scientific content (as we know from their writings) and used it purposefully.

All charts are chromlithographs on paper and were mostly mounted on different backing materials. Yet we are extraordinaríly lucky to be able to offer a very large collection in just about mint condition: they were never in use, never mounted on any backing material, got amazing vibrant colours as if they came straight off the printing press (they're not, they are seriously old), and have little if any blemishes.

The size of these wall charts is either ca. 60 x 75 or 75 x 60 cm (the "Wohlfeile Ausgabe" i.e. 'inexpensive edition' has a landscape format; it was called inexpensive because it didn't contain the entire series or reduced them to two plant representations per sheet). Few charts however came in a larger format of ca. 120 x 75 or 75 x 120 cm.

The series was published by Friedrich Vieweg & Sohn, in Braunschweig, Germany, in four edtions between 1876 and 1906. It can be divided into three distinct 'titles': The early "Ausländischen Culturpflanzen [sic!] in bunten Wand-Tafeln", one series concerning 'representatives of native plants ('Repräsentanten einheimischer Pflanzenfamilien'), and the later 'Ausländische Kulturpflanzen in farbigen Wandtafeln' ('bunte' and 'farbige Wandtafeln' both means 'colourful wall plates'), This last installment was either divided into three parts (consisting of 22, 24 and 22 charts) or two parts with 12 charts each (this was the inexpensive edition). 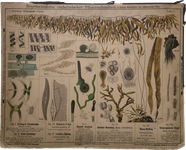 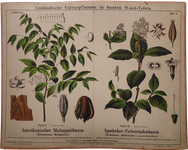 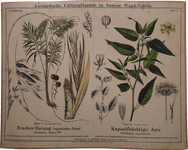 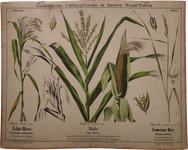 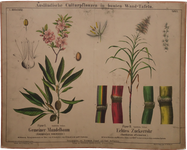 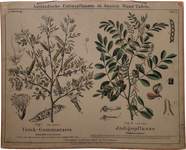 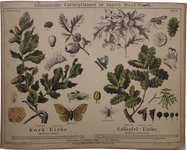 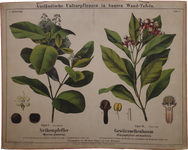